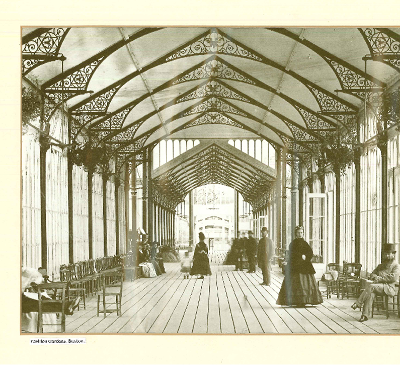 The Pavilion Gardens is an excellent historic venue which superbly shows off the Victorian splendour of Buxton. Situated in the heart of the spa town it is a beautiful example of the heritage that runs throughout the town. With the arrival of the railway in 1863, a boom period was beginning for Buxton and its guest houses and hotels. As a result it was suggested by the Seventh Duke of Devonshire that private citizens should put money into a 'company' to improve amenities in Buxton.

The gardens were designed by Sir Joseph Paxton and his pupil Edward Milner both of whom worked and built many of the greenhouses at Chatsworth House under William Cavendish, the 6th Duke of Devonshire. Sir Joseph Paxton and Edward Milner were both outstanding architects and worked to complete some of the most cherished landmarks we have today. This includes Tatton Park, Crystal Palace and Mentmore Towers.

The Pavilion Gardens was first opened in August 1871 and fortunately, at this time there were many people in the town who were willing to put their own money into paying for improvements. The then Duke responded by giving nine acres of "excellent garden ground" (eventually extended to the present 23 acres by later Ducal gifts), to be held in perpetuity on condition they were used exclusively for the purposes of recreation. The prospectus and Form of Application for shares of the Buxton Improvement Company (December 1869) make the objectives of the company clear: "to add to the attractions and increase the prosperity of Buxton".

The Concert Hall, (now known as the Octagon) designed by Buxton Architect, Robert Rippon Duke, was added later and opened in 1875. The Entertainment Stage, soon to be known as the Pavilion Theatre and later as the Hippodrome (cinema), the Playhouse (from 1935) and the Paxton Suite (from 1979) was added in 1889. Owing to the success of the theatre, the company, known since 1889 as the Buxton Gardens Company, decided that the Pavilion Theatre should be extended which led to the building of the Opera House which was opened at Whitsuntide in 1903. The Opera House itself was designed by the prolific theatre designer Frank Matcham and is one of only 17 out of 150 still standing. He also designed the London Palladium, Blackpool Opera House, Tower Theatre and Tower Ballroom, and the London Coliseum.

In 1927, the Buxton Corporation acquired the buildings, gardens and pleasure grounds and the council have managed the site ever since.

A disastrous fire in 1983 destroyed the former Lounge area and the restoration work was completed two years later.

In recent history the Pavilion Gardens have undertaken an extensive restoration project spanning seven years from the completion of the parklands to their natural Victorian splendour in 2004 right through to the refurbishment of the main inner building and the new ultra modern theatre and studio space (The Pavilion Arts Centre) being re-opened in 2010.